Our Support For The New Nutrition Labels

Last Friday (May 20, 2016), First Lady Michelle Obama revealed the nation’s first update to Nutrition Labels in over 20 years. The updated label, releasing in 2018, will have eight significant changes that will empower people to make healthier decisions. One of those changes will require companies to list how much sugar is added to their products and recommend a limit on added sugar consumption. 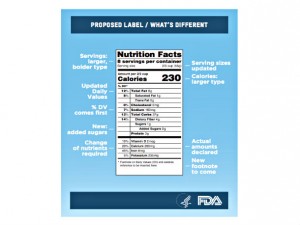 of sugar is the number one cause of the American obesity epidemic. Sugar causes inflammation, which is the precursor to heart disease, stroke and type 2 diabetes. It’s a shocking and sobering truth that the average North American diet today consists of nearly 30 teaspoons of sugar each day, a fact that many are unaware of. That’s 100 pounds of sugar every year. All sugar, when consumed in large amounts, derails your body from its natural balance.

“The Sugar Association is disappointed by the Food and Drug Administration’s (FDA) ruling to require an ‘added sugars’ declaration and daily reference value (DRV) on the Nutrition Facts Label (NFL),” the association said in a statement on Friday (May 20, 2016). “The extraordinary contradictions and irregularities, as well as the lack of scientific justification in this rule making process are unprecedented for the FDA.”

It’s no surprise; these groups have been spending millions to lobby for less label transparency in relation to GMO labeling, pesticides, and now nutrition label changes.

Type 2 diabetes has reached epidemic proportions in the US. The CDC reports more than 29 million adults in the US have diabetes. These rates are due to high sugar consumption and lack of exercise. If these rates continue, one in three Americans will have diabetes by 2050. And another 86 million — a third of the adult population — are headed down the road to diabetes, with blood sugar levels high enough to mark them as pre-diabetic. Tracking sugar consumption is extremely important for the health of our nation. Knowledge is power and we should all be aware of the sugar content in our foods.

Neka founded Urban Remedy with a simple philosophy that "food is healing" and incorporates that belief into everything she creates. Neka is a California state-licensed acupuncturist and herbalist, as well as a certified nutritional consultant. She practices acupuncture and Chinese medicine, combined with cutting-edge nutrition and lifestyle modification, to heal, balance and create optimal health. The Benefits of Tea

Most people don’t know that, technically, tea is derived from one single plant: the Camellia Sinensis. … In today’s podcast with Integrative pediatrician, Dr. Michelle Perro, we explore What is Making Our Children Sick and steps to improve and protect their … The process of self-healing isn’t easy or simple, and there’s no “right” direction — but once we find ways to connect with our subconscious, the … Color: WhiteNature: YinOrgans: Lung and Large IntestineTaste: SpicyEmotion: Grief After the abundance of green growth occurs during spring and summer, then…